1. Other countries not in the list, please see the actual payment page or contact our customer service.

2. This table is for reference only, please see the exact shipping cost and delivery time on the actual payment page.

Our policy lasts 30 days. We understand how difficult it can be to choose personal items online. Therefore, all orders can be returned/exchanged for a full refund within 30 days, with proof of purchase. Refunds do not include shipping cost.

You’ll receive a refund or replacement once we receive the item back if the item is in stock.

Please note that after an exchange is made, the item(s) do not qualify for refunds.
If 30 days have gone by since your purchase, unfortunately, we can’t offer you a refund or exchange.

To be eligible for a return, your item must be unused and in the same condition that you received it. It must also be in the original packaging.

If the item you ordered is damaged/faulty or if you received an incorrect item or missing an item, contact us: contact@mail.buddhastoneshop.com
Please give us an opportunity to serve you better! Our ultimate goal is to be sure you are 100% satisfied. We want to hear from you and know where we could have improved! Send us an email anytime. Thanks so much!
Defective items purchased within 1 year with proof of purchase may request a special promo code for 50% off the same item.


To complete your return, we require a receipt or proof of purchase.
Please do not send your purchase back to the manufacturer.

Refunds (if applicable)
Once your return is received and inspected, we will send you an email to notify you of the approval or rejection of your refund.
If you are approved, your refund will be processed, and a credit will automatically be applied to your credit card or original method of payment, within 1 week. All shipping costs of the original order are non-refundable.
If you’ve done all of this and you still have not received your refund yet, please contact us at contact@mail.buddhastoneshop.com

Late or missing refunds (if applicable)
If you haven’t received a refund yet, first check your bank account again.
Then contact your credit card company, it may take some time before your refund is officially posted.
Next contact your bank. There is often some processing time before a refund is posted.
If you’ve done all of this and you still have not received your refund yet, please contact us at contact@mail.buddhastoneshop.com

Exchanges (if applicable)
We only replace items if they are defective or damaged. If you need to exchange it for the same item, send us an email at contact@mail.buddhastoneshop.com.

Gifts
If the item was marked as a gift when purchased and shipped directly to you, you’ll receive a gift credit for the value of your return. Once the returned item is received, a gift certificate will be mailed to you.

If the item wasn’t marked as a gift when purchased, or the gift giver had the order shipped to themselves to give to you later, we will send a refund to the gift giver and he will find out about your return.

Shipping
To return your product, you will be responsible for paying for your own shipping costs for returning your item. Shipping costs are non-refundable. If you receive a refund, the cost of return shipping will be deducted from your refund.

Depending on where you live, the time it may take for your exchanged product to reach you, may vary.

You may use your own shipping method. We highly recommend using a shipper who provides a tracking number so you can track your shipment. Please be sure to retain this tracking number for your records. Buddha Stones is not responsible for packages lost in transit if sent via a non-trackable carrier.

Our shipping address for returns is:
Company Name: Buddhastoneshop

More than just jewelry, at Buddha Stone, we view it as a way of life; Accepting life's contrasts, nourishing one's spirit; Inspiring one's thoughts; revitalizing the body; Brightening your existence. When I was young, I came across an article about Tibet, and that was the starting point for me to know about Tibet.
The fascinating the snow-covered plateau, the distressing poor Tibetan life, and the devout faith of Tibetans make myself yearn for the pure and full spiritual power of the plateau.
And so, the adventure begins
Over the past four years, I have traveled to my dream serendipity Tibet numerous times. During one spiritual journeys after another, not only did I see picturesque scenery, kind Tibetans, sacred temples, but also found my deepest self. By chance, an esteemed senior gave me a Tibetan name representing Lotus - Pema. I would like to introduce myself thereafter. My love for Tibet transcends the place where I was born and any city I live in.I poured my love for Tibet into an online website dedicated to supporting Tibetan artists and the poor in the region.
We appreciate that you are a part of this path of good karma.
Pema
Founder WHY SHOP WITH US? In order to provide you the best experience, all our products are made by master craftman with selected high-quality materials and everyone owns its unique positive meaning. We hope these meaningful items will bring you good luck and positive change.💕

Dorje Meaning
The weapon in the hands of the Tathagata Dharma Protector "Guhyapāda vajrah": "Guhyapāda vajrah" holds a vajra and protects the Tathagata.
Symbol of Wisdom: The teachings do not use the vajra as a dharma tool, so there is no real vajra. The firmness of the vajra is used as a metaphor for "Great Wisdom", and with this "Great Wisdom", the firm and unbreakable mountain of lust is broken. Or destroy the boundless suffering of sentient beings. Even to destroy all heresy.
The Meaning of Five Strands
Its five peaks represent the five wisdoms and five Buddhas, one of which symbolizes the real wisdom of the Buddha, and the other four peaks symbolize the Buddha's right wisdom; and the four outer strands are curved inward, indicating that the right wisdom must return to the real wisdom.
Handmade in Nepal
Handmade by craftsmen, traditional old-fashioned craftsmanship, simple and unsophisticated, returning to the original, with black old material carbon on it, which can be wiped off or not.
How to Use the Dorje Bell
When playing, hold the handle of the bell in the left hand, and shake the bell mouth downward, the sound is clear and pleasant, and the sound is far transmitted.
It is used in Buddhist Dharma chanting and Buddhist music. It is used in lama monasteries in Tibet, as well as in the distribution areas of Lamaism in Southeast Asian countries. When the monks are chanting sutras together, they are used by the leading lamas or living Buddhas.

Vajra is a five-pronged ritual object used in Buddhist ceremonies in Tibet. It symbols the properties of a diamond (indestructibility) and a thunderbolt (irresistible force). As a symbol for the properties of a diamond, vajra signifies indestructibility as diamonds are the hardest of stones. As a symbol for the thunderbolt, vajra represents the irresistible force. It denotes cutting through ignorance since the god Indra kills ignorant persons with this weapon.
The vajra is the weapon of the Indian Vedic rain and thunder-deity Indra, and is used symbolically by the dharma traditions of Hinduism, Buddhism and Jainism often to represent firmness of spirit and spiritual power.

In the tantric traditions of Buddhism, the vajra is a symbol for the nature of reality, or sunyata, indicating endless creativity, potency, and skillful activity. 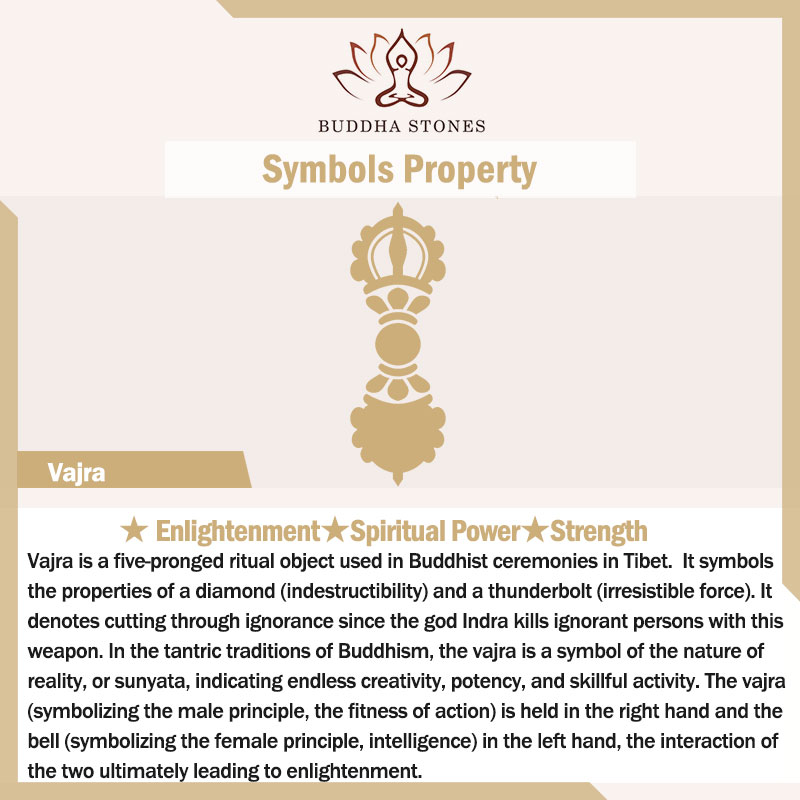 Copper metal is a good conductor of heat and electricity. Spiritually, it also grounds and transfers vibration frequencies from the physical realm to the spiritual one, and vice versa. As a result, you can channel and communicate with higher dimensional beings, cleanse your aura, mind, and find out information from the spiritual world. Copper metal is the giver of positivity and goodness, as well as the bringer of good luck in various endeavors. It attracts money, prosperity, and all-round abundance. 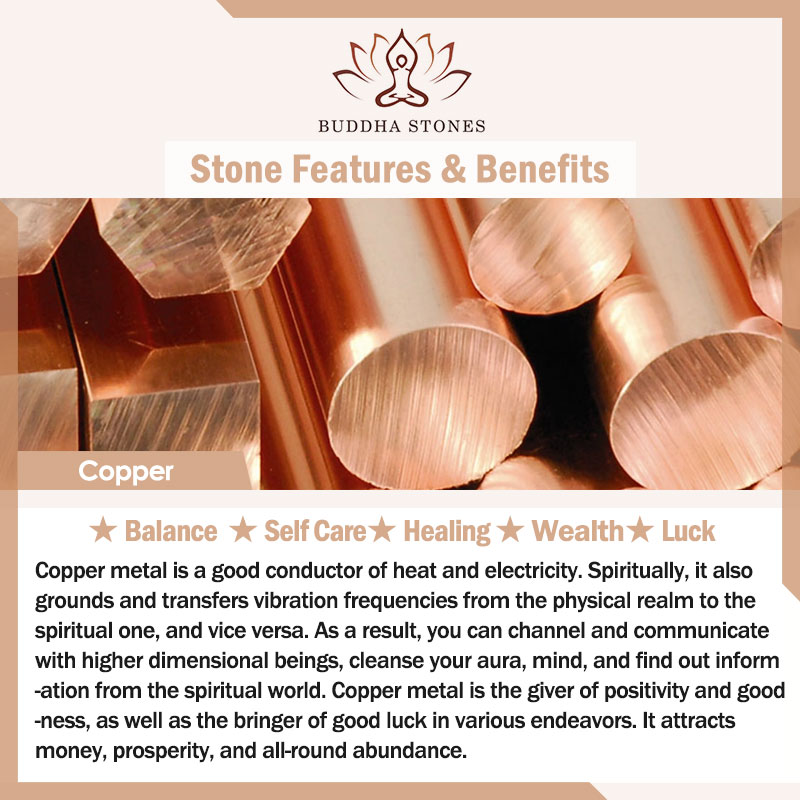